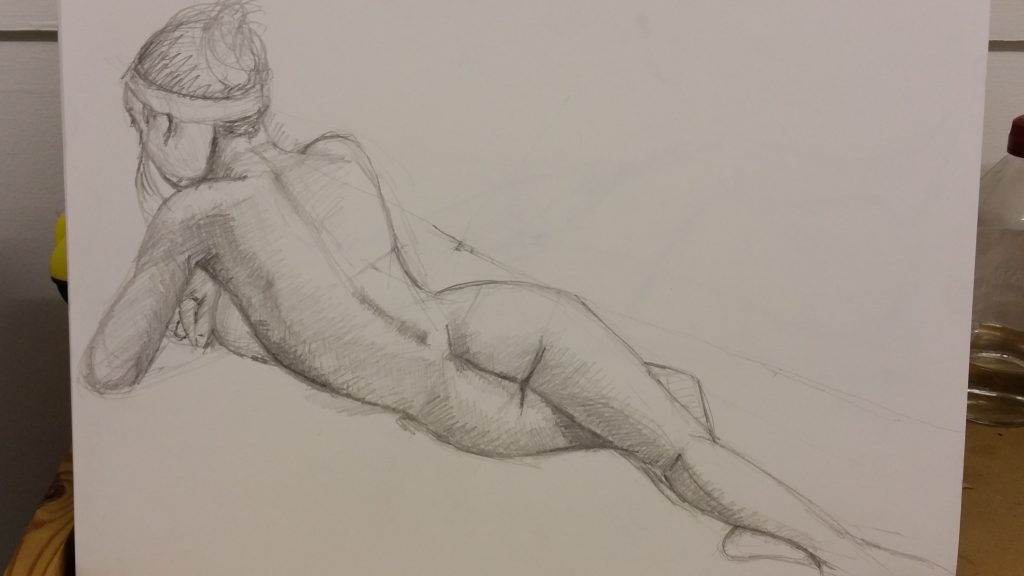 Today was a different session to the previous four I had attended - we elected the previous week to go for a long pose with a couple of short ones to kick us off as usual.  For me this was a great check point session for me.  As one of my fellow members quipped - with the longer ones there is no escape!  I really wanted to treat this session as the end of the first phase and to use the longer pose as a test of how far I had come since four weeks ago when I took up a pencil in anger once again.  My objectives were to evaluate and assess the following:

Given the length of the pose I decided to take the opportunity to start to analyse and experiment with other aspects of life drawing that shorter poses may not allow.  These were: 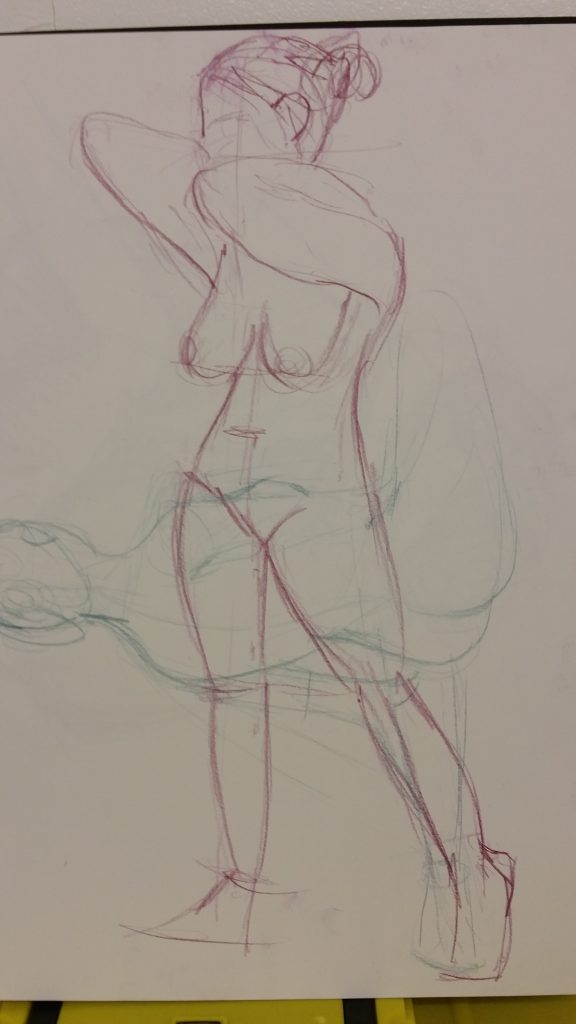 The risk you take by jumping into new materials straight away is you lose the original aim - or  at least mine - which is to draw properly, understand the prerequisites of perspective, foreshortening, tone etc.

Importantly I wanted to stick with pencil one last time as the main media for the session.  The reason for this is I believe you should master the basic materials first before going nuts with other media.  The risk you take by jumping into new materials straight away is you lose the original aim - or  at least mine - which is to draw properly, understand the prerequisites of perspective, foreshortening, tone etc.  I agree with my tutor, Al Chrichton, on my 3D design course - he said to us once when critiquing our visuals for a product we were asked to design: "New materials can also lull you into a false sense of security and when that happens your drawings stop being honest and just become over stylized, self indulgent reproductions of what you think you mean.  You also view the drawing for the quality or seductiveness of the media and not the draftsmanship.  Which from a design perspective is the most important thing."

You also view the drawing for the quality or seductiveness of the media and not the draftsmanship.

We were going to do one long 90 minuter but the model understandably realised that to maintain the twisted pose below was a bit of a stretch (no pun intended.) so we opted to go for two.  I must admit I had a bit of minor panic on that one as this was for me almost like an exam!  I had specific objectives that I needed to achieve so to have it truncated nearly scuppered that! However, it was a blessing in disguise.  I was pleased that the shading was much better than I thought and the concentration of the mind made sure that I got all the essential bits in.

I was pleased with the second one but disappointed with the quality of the shading.  It was too scratchy.  However, the understanding of light and shade was beginning to come through.  Foreshortening had improved.

Drawing with your eyes half closed

I was pleased with the drawing, all the bits were in and the shading was coming on.  He sighed and whispered, "You've missed loads!"

The understanding of anatomy on a human form is a great exercise in concentration and analysis as far as drawing goes.  I remember, in my foundation year, Jeff my drawing tutor looking over my shoulder during one session, with ten mins to go.  I was pleased with the drawing, all the bits were in and the shading was coming on.  He sighed and whispered, "You've missed loads!"  I was surpised by his ambush "What do you mean ?," I asked.   He then said, "Look at the model - half close your eyes, now look back at your drawing." I suddenly realised what he meant - its' almost like putting a different lens over your eye - like being in an opticians, you know when they say "and now this..." - you pick up so much!   An apparent flat area of flesh suddenly comes alive with a variation of tone.  A bit like a landscape, you see valleys and features you just hadn't noticed before.  It was a revelation and a technique I have always employed - when you think "I'm done" - you're not! 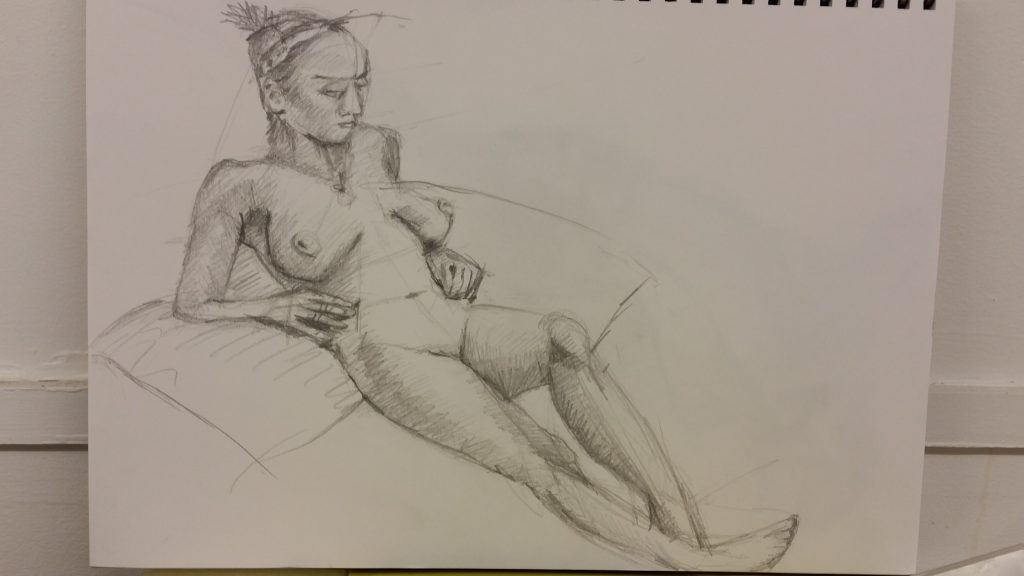 Why not just use an eraser or smudge it?

It is tempting when shading to short cut the process and finger smudge your graphite or use the end of a plastic or putty eraser to model certain areas.  But I do remember an emergency tutorial was called where there was an epidemic of this among our cohort when doing my foundation.  I have to smugly point out at this stage that I had avoided this affliction (sorry...).  Anyway, the tutors tore us apart over it.

The figures looking like a set of metal martians from a low grade sci-fi movie from the 1960's or something!

It started very gradually - somebody came in - who was a good drawer and started dashing off these fantastic life drawings - very seductive.  That was it - we all went nuts for it (ok, I did indulge once - and inhaled, but to be honest it just didn't sit right with me...).  The smudging epidemic then took hold with a vengeance and sooner or later my colleagues were all knocking out heavily outlined drawings with an almost metallic, unreal quality to them with these smudged, ultra smooth finishes.  The figures looking like a set of metal martians from a low grade sci-fi movie from the 1960's or something!  They looked horrible - impersonal and anonymous.

...there is no point using a technique without understanding WHY you should use it or without a basic mastery of what you are trying to achieve.

Smudging is not bad when used judiciously - and I will be using this technique in due course.  Well, actually I have used it in an earlier session in week three - but what the tutors were driving at is that there is no point using a technique without understanding WHY you should use it or without a basic mastery of what you are trying to achieve.  I am not ready yet to go down the smudge route until I have mastered shading properly.