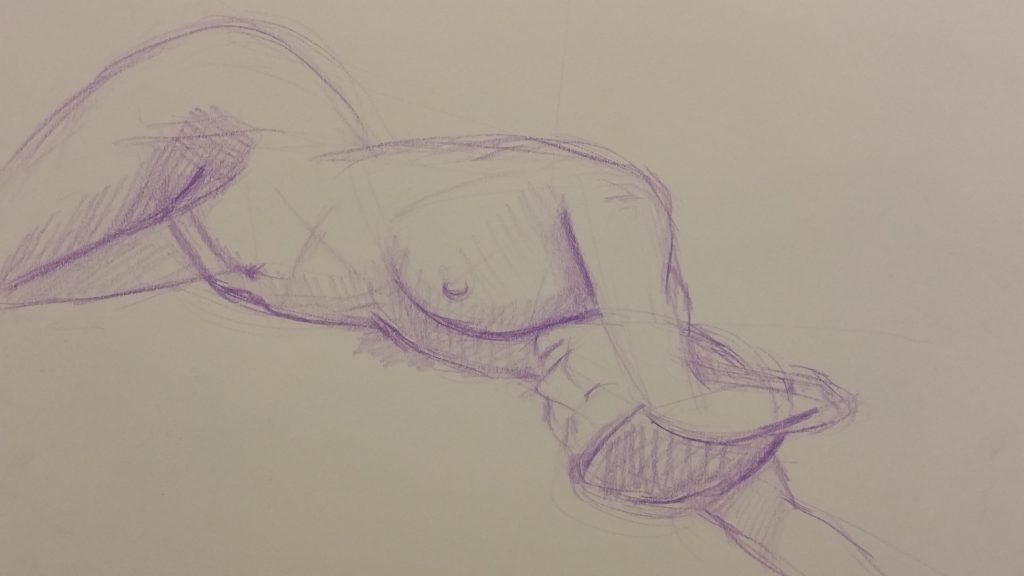 I was caught on the hop on this session - not that I minded.  I was expecting to do quick one minuters - I was a fraction late - not in a great mood either and just on the cusp of the first pose.  I wanted to repeat the exercise I did last session by overlaying poses with different colours for each one.  Turned out all the poses were 15 minutes a piece. We had two female models alternating between them.

Undaunted I pursued with my colour pencil - these pencils - WH Smiths cheap and cheerfuls were surprisingly good.  I felt like I was drawing with Conte crayon or chalk...  The colour pencils were very sympathetic and gave good tonal variation.  This was my first longish pose without using graphite 2B pencil.  To be honest I felt a bit guilty because though a 2B pencil may not be quite as sympathetic or look as 'pretty' I still didn't think I deserved to use such a giving medium as these colour pencils were.  I was also concerned I might slip into bad habits again - tram lining being the chief one. 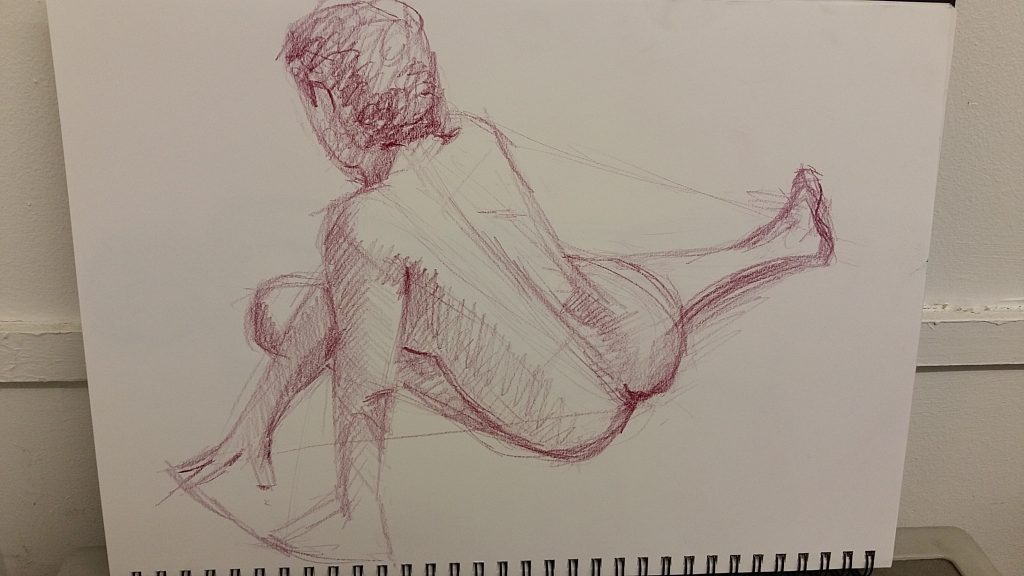 Though I was enjoying the freedom and the seductiveness of the colour pencils I was acutely aware I had some more work to do on foreshortening - it's getting there but, note to self, specific exercises are needed. 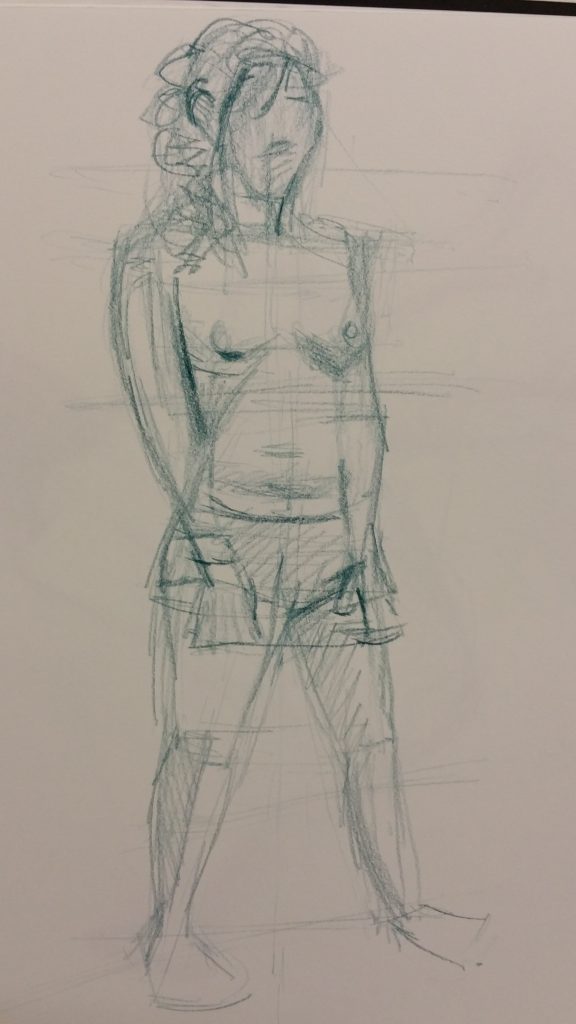 I was particularly pleased with the green standing nude (above) because without consciously thinking  about it I have understood the sense of perspective and depth needed.  What this demonstrated to me was that the exercises I was doing during the week were starting to pay off.  It is becoming second nature again.

This is probably one of my favorites from this session simple because of the dynamics of the form - very sculptural and fluid.  It reminds me of Art Deco design - much of which is based on the nude form.

What this demonstrated to me was that the exercises I was doing during the week were starting to pay off.  It is becoming second nature again. 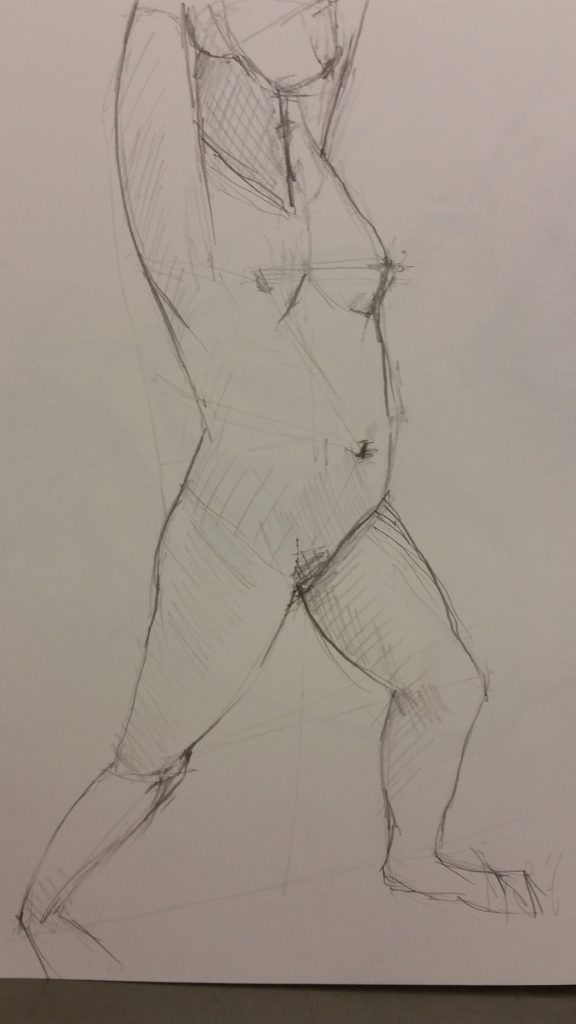 So... back to graphite - after my indulgence with the colour pencils for the first three poses this was going to be a real test.  Would I be tram-lining and scratching the hell out of it? To my surprise - no!  Whilst I was frustrated by not scaling the pose to the paper what did please me was the use of line - gone were the tramlines!  The only reason I can give for this is that I had the freedom and looseness of the colour pencils to start the session - this gave me freedom to get my eye in.   When I compare this drawing to the first two life drawing sessions in particular the improvement in line at least is clear to see. 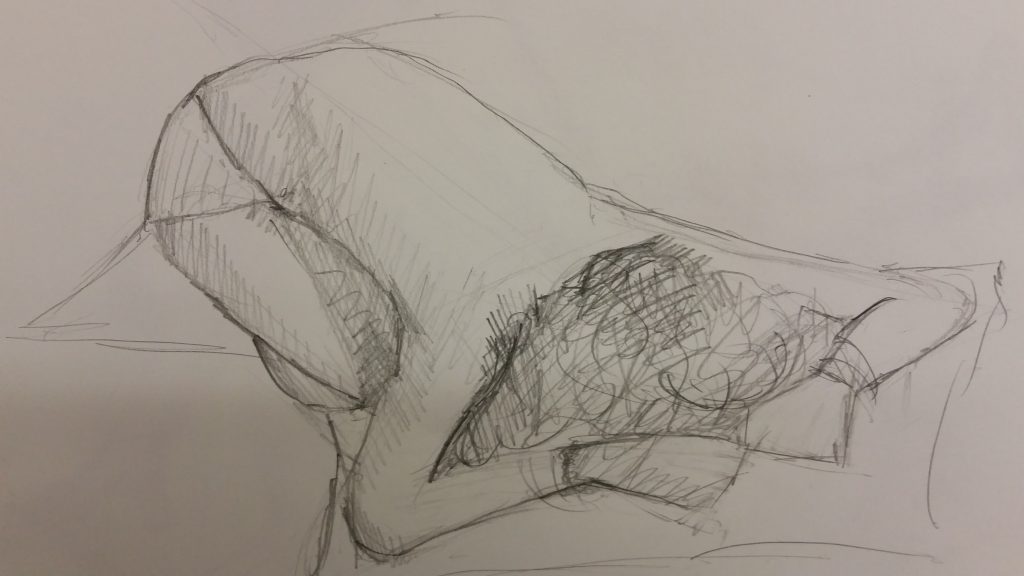 The final pose was a squat form - again very sculptural. The use of line is strong - tram lines being replaced with certainty.  What I am looking forward to doing in a month or so is to experiment with pen and even better - Indian ink and a stick. You get a controlled unpredictability with a stick and it really does give you an honest appraisal of the confidence and progress of your drawing.

...after my indulgence with the colour pencils for the first three poses this was going to be a real test.

Bits to work on