Giacometti is one of my favorite artists.  I find both his sculpture and his drawings an inspiration.  I first discovered Giacometti through his sculpture.   I liked the tactile quality of his work and his elongated forms which, for me, possess a haunting elegance.

It was on a visit to Barcelona that I got the opportunity to see his work up close and it is there that I became really engaged with is drawings.  You could see a direct correlation between his drawings and his sculpture.  His use of line is intriguing – you want to reach in and pick up his sketches and start to bend and extrude them.  He uses the drawing process almost like a model making phase. Giacometti works and works into the paper – exploring and developing form in a continual state of exploration.

Giacometti’s portraits also have that sense of depth of exploration – working the line over and over again into the paper.  Almost like he is using line to go deeper and deeper to try and capture the real soul of the subject.

Another key aspect of Giacometti’s work is the range of techniques he employs.  Wash, smudging and swift drawing using quite soft materials like charcoal, Conte crayon as well as ink and straight pencil.  There is  a very delicate, fleeting aspect to the drawing above. Its as if the figure is shimmering in the distance on a baking hot day – it could disappear at any moment.

The portrait above is actually a painting but still that strong drawing style of Giacometti’s punches through.  Its a very ‘constructed’ work in so much as you can see this image forming the basis of another sculpture as well as existing as a painting in its own right.  Giacometti, in my opinion, uses the drawing and painting process as a vehicle for his sculpture.

I love the way he works into his paintings and drawings without over cooking them.  Despite Giacometti’s working and reworking of line and tone none of his outcomes look labored and muddy.  The freshness and dynamism of his work is always present.

I would not remotely, for one single second, ever be arrogant enough to be considered in Giacometti’s class as far as drawing is concerned but I do never-the-less identify with his style.   I have wrestled with this for sometime because my drawings do possess some bad habits – however, similar to Giacometti,  I see the drawing process and line as a tool to dig deeper and deeper into the drawing.  Sometimes that may mean reworking the line – hence the tram-lining habit I an acutely aware of.

I think it would make sense for me to explore his style more – find out what works and see how I can employ the positives within my own searching style of drawing. 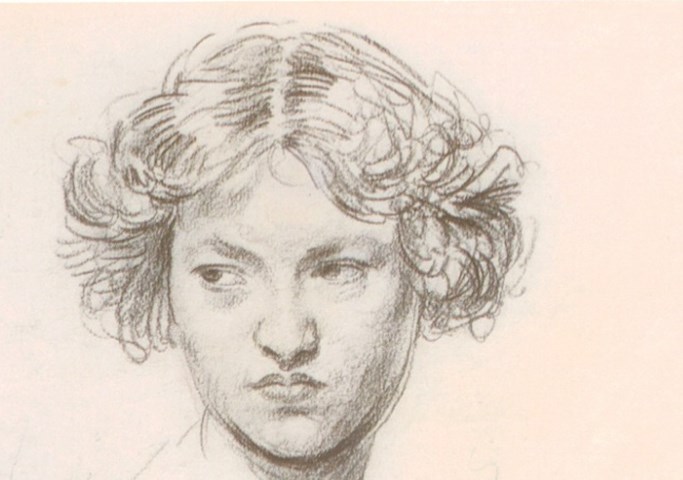 …your skill level on its own will only take you so far.

It is so important for me to strike a balance between doing it yourself and learning from others. There is a saying in professional tennis, I think John McEnroe said it – “you only learn by playing people that are better than you”. Art and design is no different in that respect for me. Unless you expose yourself to as many different styles and genres your skill level on its own will only take you so far.

So, on a Saturday afternoon I decided to jump on a bus and have a spin round the Cardiff National Museum and Gallery  – I often go there but most recently it was as a casual punter that enjoys a bit of art. On this occasion it was different, I wanted to see drawings and good use of line and technique. I wasn’t even sure who I was going to see but I knew what I wanted. I must admit I was really excited – it was just like being a student again – I wanted soak up as much as I could.

I wanted to analyse examples of use of line and construction in particular of drawings. During my quest I stumbled on a small exhibition of Augustus John’s work. It was an interesting exciting exhibition – there was so much to take in but I had to stop myself and stick to what I came for – examples of line and tone – it showed a wide variety of his work throughout his long career and also examples of work in varying degrees of completion.

For me the preparatory stage of an artist’s work is often more interesting than the completed outcome. What struck me about John’s work was the spontaneity of his drawings and paintings. Nothing was overworked – it had a freshness and an immediacy to it. 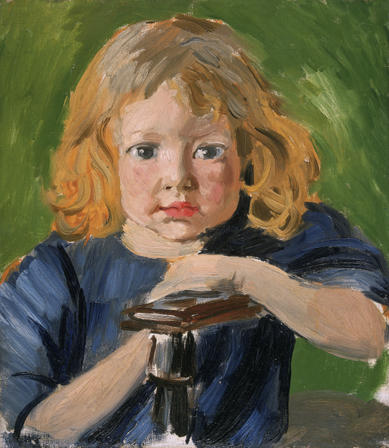 The painting encapsulates the immediacy and spontaneity of his brush work. There is just enough to suggest what he is describing in paint. The neck of the child is just one or two brush strokes – nothing more. The folds in the clothing and tonal variation are described with an un-fussy certainty. Again the arm of the chair is executed deftly – a few sure strokes illustrating the three-dimensional form and direction of light.

Nothing is overworked or wanting more. 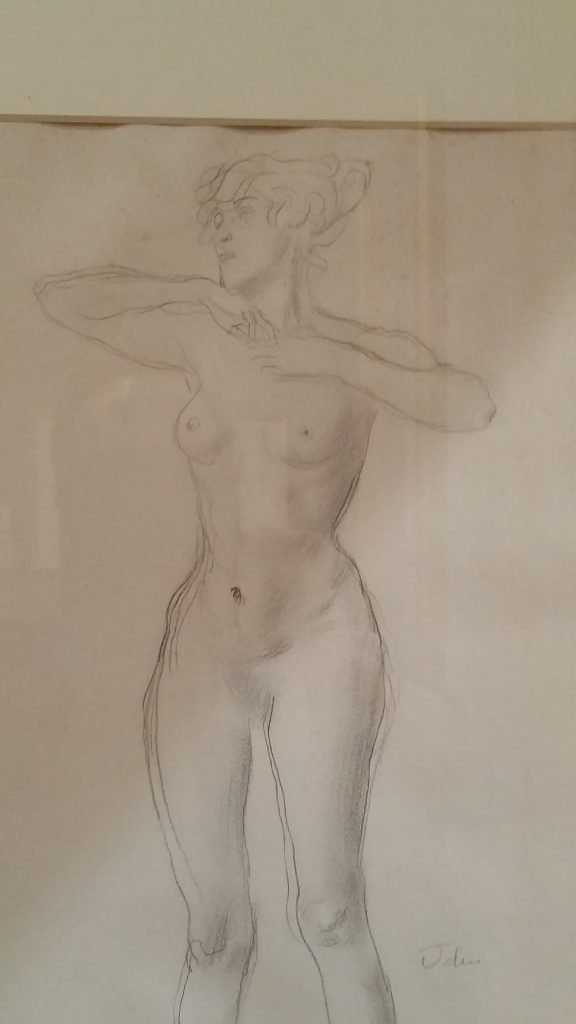 Aside from his painting it is John’s drawings that particularly interested me. This nude above is a great example of his use of line and tone. The line has that same certainty and brevity that exists in his painting. Just enough but not too much. The nude displays excellent draftsmanship, for example proportion and distribution of weight.

If you trust the process you eventually arrive at your chosen destination. The outcome is also ‘honest’.

There is also evidence of experimentation and working out the form. Never rubbing out but working out and developing the form further – working through the problem. This gives it an added freshness and dynamism. Other key aspects of this drawing include the drawing of the hands – there is a clear structure – I suppose the main trick of drawing hands is to consider the negative space and for that matter when drawing any complex object. Also I find it easier to not think of it as the object you are trying to draw – such as hand because otherwise you preconceive what it should look like and in so doing you end up with at best a skewed approximation of what it is in front of you. Instead simply draw the shapes and importantly how the negative space interacts with those forms.

It is quite liberating to draw like that – concentrating on the negative space – because its a bit like being taken on a journey of which you are not sure where you will end up.  If you trust the process you eventually arrive at your chosen destination. The outcome is also ‘honest’.

Portrait of a girl (Chalk on paper)

The Portrait of a girl (Chalk on paper) demonstrates how John applies line and tone together. The shading is all in the same direction and gradually built up to indicate darker shadow. 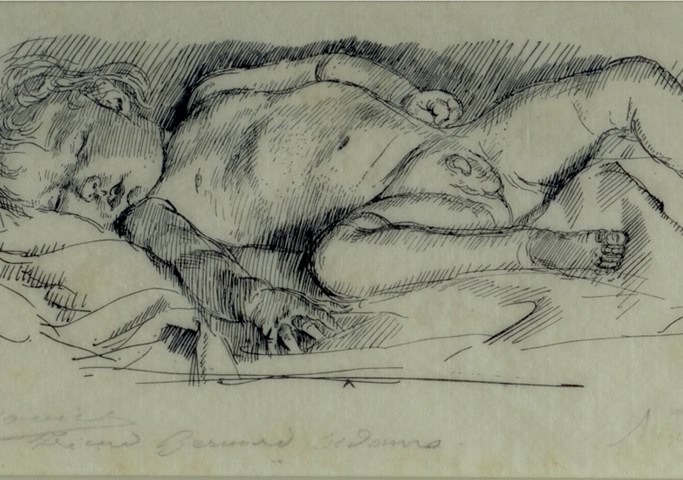 Pyramus as a baby

The pen and ink of Pyramus as a baby is also another good example of line and tone. Again the shading is always in the same direction according to the part of the body he is working on. Tone built up with more intense lines the darker it goes. Notice also the hands and feet – I discussed this earlier when examining his nude – what you have here again is something that is dynamic and that word again – honest.

This example from his sketchbook is another great execution of line and the development of ideas. 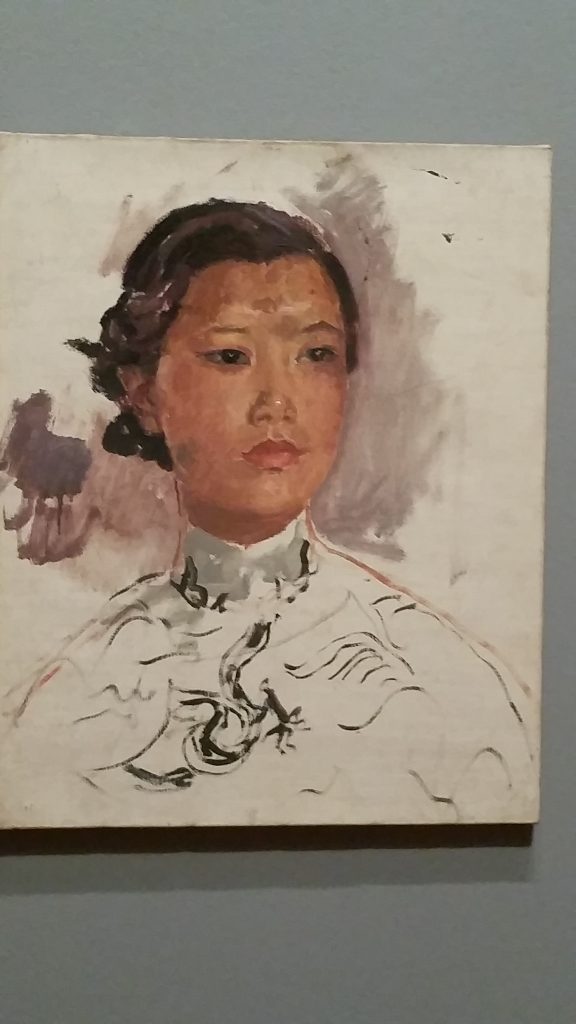 Finally, the unfinished painting of a girl demonstrates why I prefer the preparatory stage of an artists work rather than the finished article.  This example ties together his ability as a draftsman and a painter.   What was also striking was his vocabulary; fresh, energetic but not rushed to the point of carelessness – just enough.  This was visible in a brief sketch to a finished painting, Pyramus, 1913.