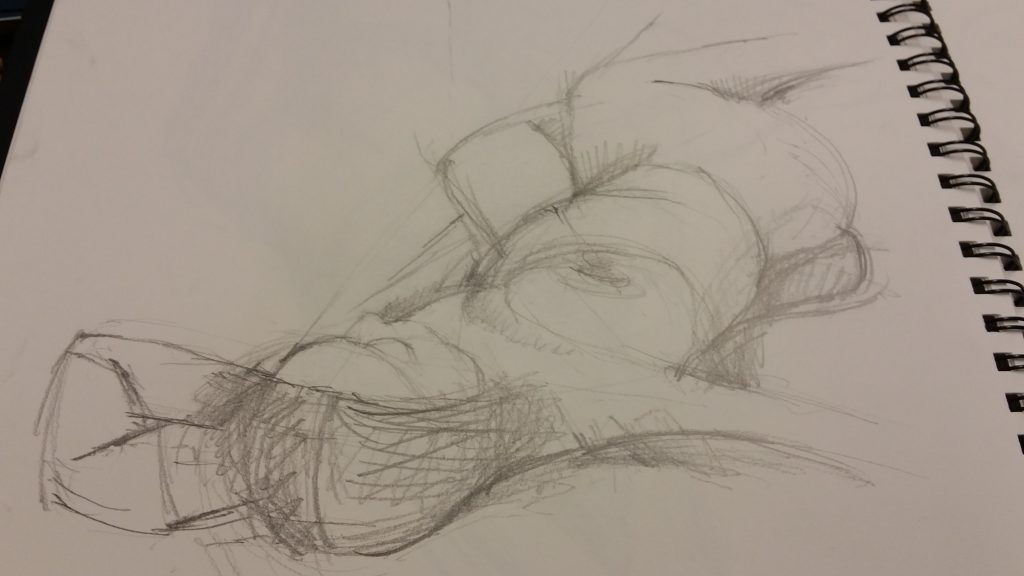 Getting back in the saddle

I have decided to go back to my college days for the next month or so and stick to very simple pencil and paper - 2B and some decent cartridge paper.  I also gave myself the rule of no eraser to be used.  The reason for the no eraser rule is its good practice to work through your mistakes - however messy. Its a bit like a maths problem that you are trying to work out.

The reason for the no eraser rule is its good practice to work through your mistakes - however messy.

I must admit this is the first time I can recall ever using a sketchbook for life drawing session.  Normally I have been in a formal studio setting with an upright easel in a college or arts centre - here we were in a vault in the Little Man Coffee Shop in Cardiff! I enjoyed the freedom a sketchbook gives you - the drawings start with quick 2 minute poses - working up gradually to 20 minutes.  This I really welcomed - it stops you over thinking - you just have to get on with it - sink or swim!  I'll leave it up to you if you think I sunk or not. My main objective for this first session was to get rid of any barriers I had in my mind about starting again and just draw in a mechanical way as possible.  Don't get wrapped up in the artistry of it - just train the eye to look at what's in front of you and nothing more.

...just train the eye to look at what's in front of you and nothing more.

The best way to describe this session- carrying on the machine analogy - is I felt a bit like walking in to a manufacturing plant that had been mothballed for years - taking the covers off the robots, dusting them down, and sort of re-calibrating them.   Hence there were and will be a few false starts but always positives to take away and refine for the next attempt.
[Show slideshow] 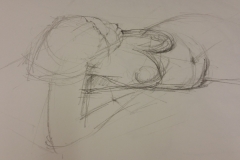 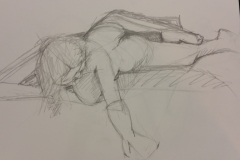 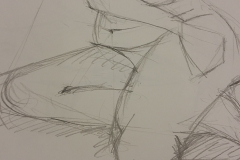 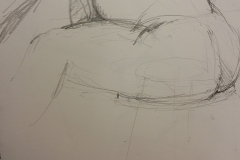 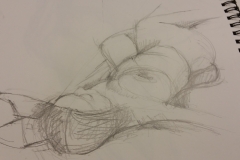 What were the positives?

I still had an understanding of proportion and was not frightened to think quickly.   Also the sense of construction was there as well - I wanted to stop thinking of the life model as a human form but as an object like any other to be recorded.

I was tram-lining too much.  What is tram-lining? Its when you draw over the same line but extend it slightly creating several lines where just one will do.   This is a bad habit to get into because the drawing can quickly lose clarity and intent. I remember my old life drawing tutor giving me grief for this back in 1992. He ended up making me draw in a 6H pencil as punishment for a couple of sessions.  It worked!  But I guess I need to get more confidence first in overall form before I inflict such a punishment on my self - which I will.  Another good remedy is to draw with pen - NOT a byrow - that's cheating!  With a pen its permanent - all or nothing.

He ended up making me draw in a 6H pencil as punishment for a couple of sessions.  It worked!